Posted by Guihon at 1:35 AM No comments:

Largest ever thermal solar plant set to open in California

Posted by Guihon at 8:11 AM No comments:

By William Davison -
Ethiopia, Sudan and Egypt agreed to examine the regional impact of a $4.2 billion dam being built on a Nile river tributary in Ethiopia after experts said earlier studies were inconclusive.
A meeting of water ministers and delegates in Sudan’s capital, Khartoum, on Nov. 4 will discuss conducting a new study of the hydropower project’s downstream effect and more detailed appraisals of its environmental and social impact, said Fekahmed Negash, head of the Ethiopian Water Ministry’s Boundary and Transboundary Rivers Affairs Directorate.
The 6,000-megawatt Grand Ethiopian Renaissance Dam, set to be Africa’s largest when completed in 2017, has raised concern in Cairo that it will reduce the flow of the Nile, which provides almost all of Egypt’s water.
In a June report, a group of international experts said Ethiopia’s analysis of the dam’s impact was “very basic, and not yet at a level of detail, sophistication and reliability that would befit a development of this magnitude, importance and with such regional impact.”
Next month’s meeting “will be on the way forward on the implementation of the recommendations of the International Panel of Experts,” Fekahmed said Oct. 18 by phone from Ethiopia’s capital, Addis Ababa.
As suggested by the panel, which included two specialists from each country and four international experts, the assessment will weigh the impact of other Ethiopian dams planned on the Blue Nile, which originates in Ethiopia and is the largest tributary of the Nile, Fekahmed said.

Ethiopia is the source of 86 percent of the water that flows into the Nile, the world’s longest river that runs 4,160 miles (6,700 kilometers) through 11 countries from Burundi in the south to Egypt, where it empties into the Mediterranean Sea. Ethiopia has said it will take five to six years to fill the 74 billion cubic-meter (2.6 trillion cubic-feet) reservoir created by the dam.
Ethiopia won’t stop construction of the dam, which will produce electricity partly for export, Ethiopian Prime Minister Hailemariam Desalegn told reporters in Addis Ababa. The project can benefit the region if all sides show “political commitment” to it, he said Oct. 4.
Sudan backs the dam, which will “bring many benefits and blessings for us,” Sudanese Information Minister Ahmed Bilal Osman said in June.

Concerns raised by the panel about the structure of the dam being built in western Ethiopia, 30 kilometers (18 miles) from the Sudanese border, have been addressed by contractor Salini Costruttori SpA, according to Fekahmed. The Rome-based company is able to adjust its design during construction as it has a contract to manage the entire project, he said.
The panel’s call to assess the stability of the rocks on which the foundations of the main dam and an auxiliary dam will rest was a “reminder” to Salini to “take care of this in the design,” Gideon Asfaw, an Ethiopian civil engineer who sat on the panel, said in an interview.
“Whatever you find there is an engineering solution to it,” he said in Addis Ababa on Oct. 11. “There is no cause for alarm regarding the geological formation or the foundation design.”
Posted by Guihon at 2:42 AM No comments:

STORY HIGHLIGHTS
(CNN) -- Resource rich and home to some of the world's fastest-growing economies, the stage is set for Africa to become the world's next industrial juggernaut.
But making this dream a reality remains a major challenge.
A lack of railways, ports and quality roads has hindered Africa's development in recent years. But today, economic heavyweights such as China and India are pumping billions of dollars into Africa to transform the continent's fortunes and stake a claim in the world's next high-growth territory. 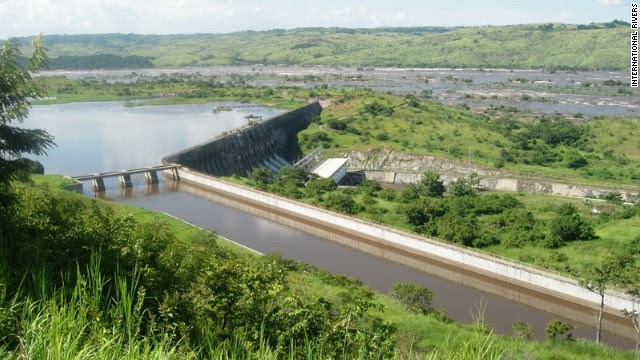 And last month, the African Development Bank and the Africa Foundation launched a fundraising initiative for Africa50, a project aimed at speeding up infrastructure ventures on the continent.
Here, CNN takes a look at some of the big projects set to take Africa by storm. Tell us what you think about them in the comments section below. 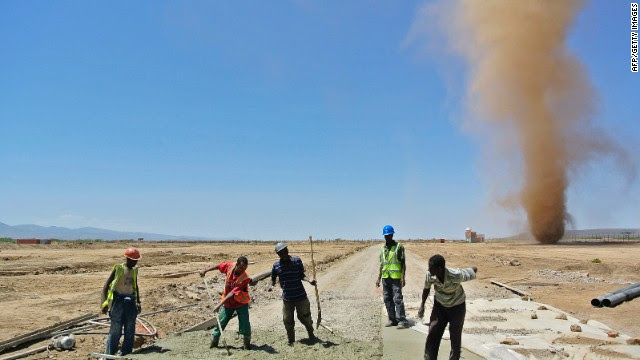 Economist: Africa needs infrastructure
World Bank estimates suggest that just 11.1% of DRC's population has access to electricity. But with the whole project estimated to cost $80 billion, analysts says that raising funds will be a challenge.

Zambia's investment in infrastructure
Stretching almost 3,000 kilometers and connecting three East African countries, the Mombasa-Kigali railway could be the continent's answer to the Orient Express.
Starting in Kenya's second city with a stop-off at the Ugandan capital, Kampala, the rail line will circumvent Lake Victoria before heading for its final destination of Kigali, Rwanda.
With work scheduled to start on the Mombasa-Nairobi section next month, the whole project is due to be completed by March 2018 with an estimated cost of $13.5 billion.
Konza City -- Kenya
Konza City is a $9.2 billion dollar technology and financial metropolis project located southeast of Nairobi.
Dubbed the "African Silicon Savannah" the project is part of "Vision 2030," the Kenyan government's plan to improve the quality of life for its citizens.
Read this: Ghana plans $10 billion tech city
The government expects the city to provide 100,000 jobs and will include a business district, a university, residential areas and city parks.
But the state will provide only 5% of the funding, with the rest expected to come through land leases to private companies.
Ethio-Djibouti railway -- Ethiopia/Djibouti
This 650-kilometer railway will link up the Ethiopian capital of Addis Ababa and the Port of Doraleh in the small Red Sea nation of Djibouti.
The project is part of the Ethiopian government's Growth and Transformation plan and is set to cost $1.2 billion, according to estimates from consultancy KMPG.
Djibouti represents Ethiopia's only seaport access and would significantly reduce the cost of goods and transportation for the landlocked country. 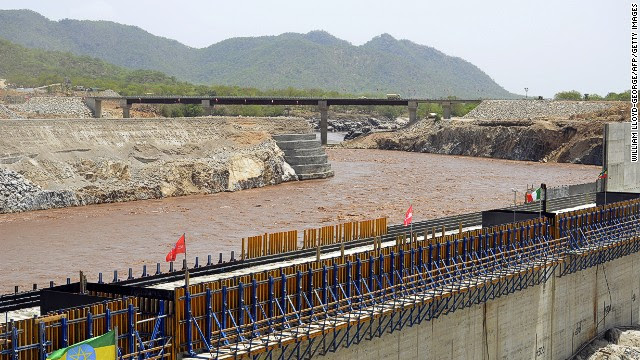 China's growing influence in Africa
Ethiopia's 'under construction' renaissance dam is set to be as grand on scale as it is in name.
Scheduled to be completed by July 2017, the enormous barrier will cost the Ethiopian government $4.7 billion and is being assembled by Italian engineering firm Salini Costruttori.
The Renaissance Dam will sit on the Blue Nile river in the Benishangul-Gumuz region. Creating 12,000 jobs and generating 6,000 MW of energy, the dam will also serve neighboring Sudan and Egypt, which both rely of the Nile River's water resources.
The project has caused controversy in Sudan and Egypt, as both countries are concerned the dam will give Ethiopia control over the flow of water.
Jasper project -- South Africa
Once completed, the Jasper Power Project will be a 96 MW solar photovoltaic (PV) plant in South Africa's Northern Cape -- one of the biggest solar installations in the continent.
In May this year, Internet giant Google, which has spent more than $1 billion in renewable energy projects in the United States and Europe in recent years, made a $12 million investment in the scheme.
The project will create 300 construction jobs and 50 permanent operational jobs, according to the South African Department of Energy.
Read more: 'Solar sisters' spreading light in Africa
The joint venture is part of South Africa's ambitious target of generating 18 gigawatts (GW) of clean energy by 2030 and reducing its dependency on coal.
Other African countries are also following the solar craze. Earlier this year, Mauritania, in West Africa, launched what's described as Africa's biggest solar PV plant so far, a 15 MW solar PV plant that will supply energy to nearly 10,000 homes.
Lagos Metro Blue Line
A major cosmopolitan transport project to connect Nigeria's largest city, the Lagos Metro Blue Line is designed to ease congestion and speed up journey times for the city's inhabitants.
The Blue Line will run between Marina and Okokomaiko stopping at 13 stations and is part of the Lagos Rail Mass Transit program implemented by the government.
Read this: Lagos of the future
However, funding issues mean the Blue Line launch has been pushed back to 2015. The Line is set to cost $1.2 billion and will be funded by the Lagos State Government. Rail operator Eko Rail has a 25-year contract to run and maintain the service.
Posted by Guihon at 2:51 AM No comments:

Ethiopia’s plan to build Africa’s biggest hydropower dam on the main tributary of the Nile River must address concerns that there may be flaws in the design of its foundations, a group of international experts said.
They also called for further studies on what impact the 6,000-megawatt, $4.7 billion project may have on the downstream nations of Sudan and Egypt, the International Panel of Experts said in a report e-mailed to Bloomberg News and verified by Ethiopia’s Foreign Ministry. Egypt, which relies on the Nile for almost all of its water, expressed alarm about the dam when Ethiopia in May diverted the Blue Nile as part of the construction process.
“Structural measures might be needed to stabilize the foundation to achieve the required safety against sliding” of the main dam, according to the report. There are also “weak zones” in the rock that will support an auxiliary dam that need to be studied, it said.
STORY: Hank Paulson: This Is What It Was Like to Face the Financial Crisis
Construction of the Grand Ethiopian Renaissance Dam is part of a government plan to spend 569 billion birr ($30 billion) on infrastructure in the five years through mid-2015. The country, Africa’s second-most populous nation, targets becoming an industrialized middle-income nation by 2025.
Ethiopia is the source of 86 percent of the water that flows into the Nile, the world’s longest river that runs 4,160 miles through 11 countries from Burundi in the south to Egypt, where it empties into the Mediterranean Sea. Ethiopia has said it will take five to six years to fill the 74 billion cubic-meter (2.6 trillion cubic-feet) reservoir created by the dam.

The panel, which held its first meeting in May last year, was formed at the suggestion of Ethiopia’s government. It comprised two specialists each from Ethiopia, Egypt and Sudan and four from other nations. The report, which hasn’t been made public, was submitted to the three governments in June.
STORY: Univision's English-Language News Network, Fusion, Targets Millennials
Ethiopia said the report found the project to be of international standard and won’t cause “significant harm” to downstream countries, while Egypt said it was inconclusive.
Ethiopia delivered a hydrological study to the panel that analyzed the downstream impact of the reservoir-filling period given low, average or high rainfall.
The project document concluded that Egypt faces a 6 percent reduction in the High Aswan Dam’s electricity-generating capacity and no water loss if the reservoir was filled during years of average or high rainfall. If the reservoir was filled in a dry year it would “significantly impact on water supply to Egypt and cause the loss of power generation at High Aswan Dam for extended periods,” according to the document.
A “comprehensive” additional study of the dam’s impact on water resources should be conducted, the panel said after reviewing the document. “The analysis presented is very basic, and not yet at a level of detail, sophistication and reliability that would befit a development of this magnitude, importance and with such regional impact.”
Ethiopia is working with Sudan and Egypt to enact the panel’s recommendations, Dina Mufti, a spokesman for the Foreign Ministry, said in an interview today in the capital, Addis Ababa.
To contact the reporter on this story: William Davison in Addis Ababa at wdavison3@bloomberg.net
To contact the editor responsible for this story: Paul Richardson at pmrichardson@bloomberg.net
Posted by Guihon at 8:45 AM No comments: