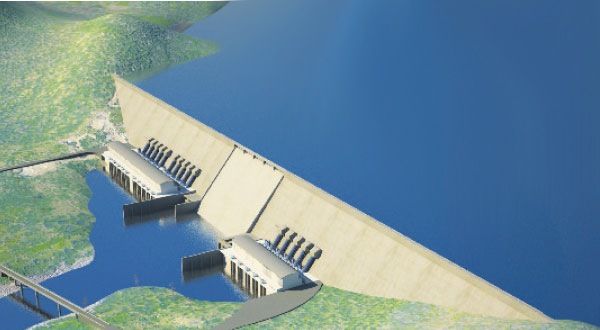 Asmahan Soliman
Intense activity by several official Egyptian actors is underway as Ethiopia begins to pool water at the Grand Ethiopian Renaissance Dam reservoir site, which Ethiopia began without providing Cairo with official notice. An Egyptian government source told Mada Masr that Addis Ababa has started what he called an “early filling” of the dam.
A government source linked to the renaissance dam file told Mada Masr that vigorous governmental action had in fact started regarding the dam, the construction of which is nearing completion and would lead to a significant decline in the Egypt’s historical share of Nile water. “We are now facing a different situation than the one we expected and feared: the possibility that Ethiopia will move even faster than it is entitled to move. We are thus currently considering which way to react,” said the source, speaking on a condition of anonymity.
Egypt’s share of the Nile water is already considered insufficient in meeting the growing needs of the country. It is expected that the flow of water will decline for an unspecified period before reaching its new rate – according to the most optimistic estimates – in five years.
The source indicated that the governmental activity includes several ministries, among which are the ministries of foreign affairs and irrigation, as well as security and information entities.
On Thursday, Hossam al-Imam, the official spokesperson for Egypt’s Ministry of Irrigation and Water Resources, denied that Ethiopia had begun filling the dam. He said that the amount of water recorded at the dam “is not significant” and that it coincides with the flooding of the Blue Nile. These statements coincided with the Egyptian irrigation minister’s visit to Tanzania and Kenya, two members of the Nile Basin countries, where he conducted bilateral negotiations aiming to raise the efficiency of the joint use of water resources.

Cairo was “flexible and understanding”

Cairo is preparing to organize a tripartite committee meeting,  with representatives from Egypt, Sudan and Ethiopia. It is expected that the meeting will take place at the end of this month. The committee is working on following up on obligatory technical studies relating to the dam, as specified by the agreement signed by the committee in Spring 2015. The tripartite agreement bars the upstream countries from beginning the construction process before these studies have been completed and confirming that Addis Ababa has taken into account all technical considerations.
“It’s too late now for such actions. We are now following this path just to ensure our legal rights in case we decide to follow legal or diplomatic procedures, seeing that Ethiopia has already begun construction without the submission of the technical reports,” said another governmental source, familiar with the dam file and speaking on condition of anonymity.He also indicated that Cairo was very flexible in dealing with the renaissance dam.
The Grand Ethiopian Renaissance Dam is projected to hold more than 70 million cubic meters of water. As a result, Egypt could lose 65 billion cubic meters of its share. The two parties disagree on the specific timeframe for filling the reservoir, with Addis Ababa suggesting three years while Cairo aims for a period between three and seven years, according to the source.  “The negotiations between the two parties cannot be seen as achieving any kind of progress,” the source said, indicating that the stalemate was clear in the Nile basin states’ summit meetings, which were hosted by Uganda last month.
The lack of progress was also palpable during a meeting between Foreign Minister Sameh Shoukry and his Ethiopian counterpart, that took place on the margins of a meeting between the African Union foreign ministers. “Cairo feels that it has shown a lot of understanding regarding Ethiopia’s position and has refrained from exerting any exaggerated pressure on it, but Ethiopia did not reciprocate this understanding,” he said.
He also emphasized the failure of the mediation attempts made by several actors, who tried to persuade Addis Ababa to deal more positively with Egypt’s concerns. However, he refused to comment on whether Israel was one of the states mediating between Egypt and Ethiopia. He also refused to comment on the position of Saudi Arabia regarding this issue. Nevertheless, he did add that Sudan “does not stand by Egypt at all. It, in fact, stands by Ethiopia.”

A Sudanese diplomatic source told Mada Masr that “Khartoum understands Egypt’s concerns. However, it [Sudan] finds that its direct and developing interests lie with Ethiopia.” He added that Cairo cannot expect a full and direct alliance from Khartoum at this stage.
The Sudanese source pointed out that Cairo’s two most prominent regional allies are Riyadh and Abu Dhabi, and that they are the ones who can persuade Addis Ababa to “appropriately schedule filling the reservoir” in a way that reduces the damage befalling Egypt, especially given the interests that Saudi Arabia and the UAE share with Ethiopia, whether in regard to the dam, or in other areas.
The two Egyptian sources confirmed that the path to technological negotiations with Ethiopia and Sudan does not seem easily navigable. They indicated that the statement Egyptian Foreign Minister Sameh Shoukry made on the margins of the African Union summit in Addis Ababa earlier this month, accurately sums up the situation: “The matter now is in need of political intervention.”
Posted by Guihon at 2:47 AM