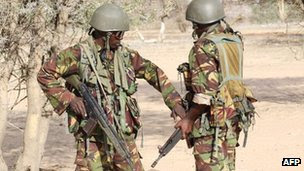 It is possible that the Somali authorities have spoken out because they are opposed to the idea of Kenya helping to establish a semi-autonomous region in Somalia known as Jubaland, he says.
This is seen by some as the main aim of the Kenyan government's military incursion, our correspondent says.
Last week, a Somali general told the BBC his troops were working with Kenyan forces advancing from the border towards the port city of Kismayo.
On Sunday there were aerial bombardments on Kismayo, an economic stronghold of al-Shabab.
The Kenyan army told the BBC that a military base belonging to al-Shabab was hit, but the militants said no damage had been caused.
Kenyan army spokesman Maj Emmanuel Chirchir would not confirm whether Kenyan or other allied forces had carried out the raid.
He told AP news agency that the French navy had bombed the town of Kuda along the coast from Kismayo on Saturday night.
Last week, al-Shabab lost control of the coastal town of Ras Kamboni after attacks by the Kenyan navy and a local militia.
The French authorities said they had learnt last week that a Frenchwoman kidnapped from Kenya by Somali gunmen earlier in the month had died.
Other foreigners being held in Somalia include a British woman abducted from a coastal resort and a Kenyan driver and two Spanish aid workers seized from the Dadaab refugee camp near the Kenya-Somalia border.
Al-Shabab has threatened reprisal attacks in Kenya if the troops do not leave. Kenya's police chief says a grenade attack overnight in Nairobi which injured 12 people in a nightclub could not be linked to the militant group.
Posted by Guihon at 7:58 PM