Today's Egyptians are facing two overriding crises that threaten their national wellbeing.
The one that is getting all the world headlines involves the domestic unrest over the now former Islamist government; the other is a foreign threat to alter the flow of the country's essential life force, the Nile River.
For millennia, Egypt, which gets very little rainfall, has been totally dependent on the water and the silt of the Nile to survive and feed a now fast-growing population of 85 million.
So critical is this flow of the Nile that any diminution upstream is seen as a threat to the country's very existence. That's why Cairo has long vowed some form of direct military action, if necessary, to stop Ethiopia building a giant hydroelectric dam along the headwaters of the Nile that flows through its northern highlands.
This conflict has now shifted from the theoretical to the practical. Refusing to be cowed, Ethiopia has now started work, with China's help, on the Grand Ethiopian Renaissance Dam, the largest in Africa.
Ethiopia feels it has as much right to the Nile water, and an equal need, to escape its crippling poverty. The dam's future hydroelectric capacity, Ethiopia insists, will allow it to grow economically. 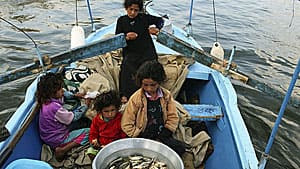 A girl rows her family's fishing boat on the Nile in April 2013. Most of Egypt's population is clustered around the river and its delta, and draw their livelihoods from it in one way or another.(Asmaa Waguih / Reuters)

That argument does not appease Egypt one iota. It insists the massive reservoir that will be created will reduce the downstream flow of water to Egypt by a catastrophic 20 per cent. Vast farming regions will be lost; millions will lose already fragile livelihoods.
What's more, Ethiopia's actions, if allowed to succeed, will surely encourage others to follow suit.
The Blue and the White Niles, which meet before flowing to Egypt, cross many other nations as well, all of which are desperate for hydroelectricity and irrigation.

So serious is the concern that, before the anti-government demonstrations and the Egyptian army's coup earlier this month, it was the Nile conflict that dominated news coverage in Egypt, fed by increasingly strident threats from officials and politicians.
"If we lose one drop, our blood is the alternative," then-president Mohammed Morsi vowed, shortly before his overthrow, a barely veiled threat of war echoed by, among others, the country's foreign minister.
The idea sounds incredible. But not to diplomats in the region who noted in early June a live television broadcast from Morsi's office that inadvertently picked up the president and senior political leaders discussing a possible pre-emptive attack on Ethiopia.
The military alternatives ranged from an Egyptian air attack on the dam construction sites to guerrilla sabotage and even moves to destabilize the Addis Ababa government.
When Ethiopia demanded an explanation of the broadcast, Morsi was unapologetic, vowing that "all options are open."
For its part, Ethiopia appears to doubt that Egypt has the capability to launch a direct attack against its own capable military, especially as the two countries are separated by the vast, harsh terrain of Northern Sudan.
However, Northern Sudan, along with Eritrea to Ethiopia's north, both side with Egypt in this dispute, so the Ethiopian government can't ignore Egypt's ability to at least stir up the kind of guerrilla activity that could dramatically escalate the crisis.

Taking no chances Ethiopia has just rushed through a 15 per cent increase in its defence budget. 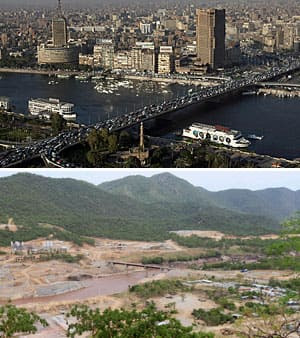 Top, the Nile as it flows through downtown Cairo. Bottom, construction begins on Ethiopia's Great Renaissance Dam near Guba Woreda, about 40 kilometres from the border with Sudan. (Reuters)

It is also discussing with Russia the purchase of 18 modernized SU-30 jet fighters to further beef up an air force that is regarded as one of the most capable on the continent. (Ethiopian pilots now train South Africa's.)
Most analysts doubt this so-called "river conflict" will lead to actual war. However, we do live in exceptionally unpredictable times as the upheavals across North Africa and the civil war in Syria clearly show.
What is particularly worrisome right now is that the new military-backed government in Cairo may be strongly tempted to use such a dangerous foreign crisis to try to cool off demonstrations at home and unite its deeply divided population.
The pro-army elements in Cairo may well conclude that a period of sabre-rattling over so vital a resource would also allow Egypt's currently hard-pressed military to again parade itself in a "national guardian" role.
Beyond all the political posturing, however, there's no doubt that each side feels itself to be absolutely in the right, with no room to retreat. Either government would be weakened domestically by any hint of surrender.
Egypt appears to feel as deeply about a future decline in Nile water flow as Israel does about Iran getting nuclear weapons. In Egypt, it's seen as an existential threat, non-negotiable.
"This is a red line for Egypt's existence," Hussam Swailam, a prominent Egyptian military analyst has declared. This dam "would threaten us with thirst and death."

Apart from outright threats, Egypt has always relied on dubious treaties, dating back to colonial times, to keeps its lion's share of the Nile constant.
A 1929 Nile waters agreement, enforced by Britain gave Egypt up to 90 per cent of the annual flow plus a right to veto upstream dams that threaten that supply.
Although Ethiopia's tributary, the Blue Nile, generates 75 to 80 per cent of the Nile's total annual flow, Ethiopia was never consulted when this agreement was drawn up.
It dismisses the veto as preposterous and unenforceable today.
So do a half-dozen other nearby nations. Uganda's long-serving President Yoweri Museveni recently insisted that the time when Egypt can dictate terms over the Nile is over. "Egypt cannot continue to hurt black Africa and the countries of the tropics of Africa," he declared.
Ethiopia, capable of being heavy-handed itself, is far from blameless in this crisis.
It has generally failed to consult Egypt over its plans and has been brusque in dismissing Cairo's concerns.
In a larger sense, the dispute is compounded by a perceived power shift in the whole region.
Egypt, the long-time kingpin in North and Eastern Africa, and a powerhouse in the Arab world, appears in decline at the very time that Ethiopia, the second largest country in Africa and with an equally large population, is on the rise.
Though still desperately poor, Ethiopia has surprised the world over the past decade with the highest economic growth rate on the continent (close to 10 per cent annually on average for most of the past decade). It has a newly assertive middle class and a strong modernization program in the works.
The dam, which is estimated to cost close to $5 billion, will make Ethiopia a net exporter of electricity in the region, and could potentially power Asian-style industrialization (with a big boost from close friend China).
Diplomats seem to feel the Nile conflict can still be defused if only Ethiopia can reassure Egypt over the water flow by limiting the size of its dam, and perhaps offer up a share of the power to be produced.
So far agreement seems unlikely, and the ongoing threat of chaos in Egypt is not expected to smooth the road to a solution, nor calm the rhetoric on either side.
Posted by Guihon at 1:21 AM