While underlining the strategic nature of water resources to Egypt, Foreign Minister Shoukry added that the Nile River links Egypt and Ethiopia 'in the course of history and forever' 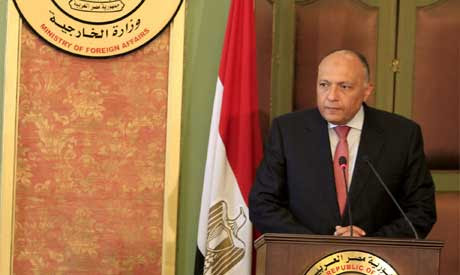 No Egyptian official will ever cede Egypt's right to its water security, Egyptian Foreign Minister Sameh Shoukry said in an interview with Al-Ahram daily published Saturday.


"Any Egyptian citizen should be assured of the ability of Egypt and its negotiators to protect its water interests," Shoukry said.
Shoukry said that the Ethiopian Grand Renaissance Dam issue is one that represents a major challenge for relations between Egypt, Sudan and Ethiopia, as it impacts each country directly.
Shoukry's interview with Al-Ahram comes a few days after Egypt expressed hope that the three countries will reach a consensus in the upcoming round of talks, due to take place in the Sudanese capital Khartoum on 27-28 December.
Shoukry said that current negotiations have now reached an "important crossroads."
Shoukry added that the technical aspect of negotiations was stalled due to the failure of the two foreign consultancy firms, Dutch Deltares and French BRL, to work together, leading to a series of meetings between representatives of the three countries to try to agree on other consultancy firms to undertake studies related to the impact of the dam.
Shoukry said it was important to reaffirm the "Declaration of Principles" signed between the heads of the three countries in March 2015 and the timeframe agreed to ensure that after the technical studies are conducted the three countries would be able to agree on clear and strict regulations on the first filling of the dam and its operation to preserve the interests of all in accordance with the recommendations of the consultancy firms.
The Egyptian foreign minister said that it was important that everyone acknowledge the strategic nature of relations between the three countries, adding that Egypt is keen on avoiding any harm to any party.
"There is no doubt that there is a negative legacy in the Egyptian-Ethiopian relationship that is originally due to long years of disparity and indirect communication, and a reliance on negative impressions about one another at a time where the Nile actually connects the destiny of two countries in the course of history and forever," Shoukry said.
Egyptian-Ethiopian relations have witnessed decades of tumult, including under the ousted regime of Hosni Mubarak.
The Ethiopian Grand Renaissance Dam, scheduled to be completed in 2017, will be Africa's largest hydroelectric power plant with a storage capacity of 74 billion cubic metres of water.
Egypt has repeatedly expressed concerns that filling and operating the dam on the Blue Nile will negatively affect its water supply. Ethiopia in turn rejected these claims.
Posted by Guihon at 2:03 AM