Although Egypt has repeatedly expressed concern over the dam's possible effect on the country, Ethiopia insists it will not negatively affect Egypt's share of Nile water 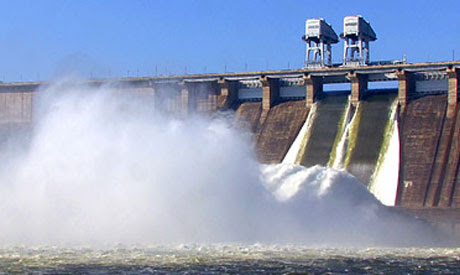 
The Egyptian committee will study and review the offer ahead of a tripartite meeting where it will be discussed with the attendance of the two foreign consultancy firms' representatives, as agreed upon on in the roadmap approved in Sudan's Khartoum, Moghazi said.
Moghazi said that the offer involves two assessment studies- a risk assessment related to the effects of the dam on the water flowing to Egypt and Sudan, and another study that addresses environmental concerns.
In a previous TV interview, the Egyptian irrigation minister said that the two studies, which are not concerned with the redesign of the dam, would be finished in 11 months, with the first study starting in February.
Moghazi's statements came ahead of Egyptian President Abdel-Fattah El-Sisi's visit to Ethiopia's Addis Ababa on Friday, where he is expected to hold talks with his counterparts from Sudan and Ethiopia over the dam, ahead of the upcoming African Union summit in Addis Ababa.
Prior to the AU summit, Egypt's ambassador to Ethiopia Abu Bakr Hanafi said that Ethiopia has not breached the declaration of principles signed by the leaders of the three countries in March 2015.
Hanafi said Ethiopia has not violated the 5th principle, which is related to the dam's storage reservoir’s first filling, and dam operation policies. The principle also stipulates that an agreement should be reached on the guidelines for different scenarios of the first filling of the Grand Ethiopian Renaissance Dam’s reservoir in parallel with its construction.
The Egyptian ambassador said that Egypt's new foreign policy in Africa has had a positive impact on an international level, where Egypt now obtains major support, especially on issues related to its right in Nile Water.
Hanafi refuted any Egyptian intention to launch a military operation against Ethiopia, affirming that such an option is never on the table, especially because the Ethiopian “brothers” said that they don’t want to harm Egypt and its people.
"There would be an important move on an international level where Egypt could resort to international water laws that guarantee the downstream countries' right of water share from shared rivers with upstream countries," Hanafi said when asked about Egypt's response if Ethiopia breached the agreement.
Although Egypt has repeatedly expressed concern over the dam's possible effect on the country, Ethiopia insists it will not negatively affect Egypt's share of Nile water.
In December 2015, President El-Sisi addressed the public saying that there is no reason to worry about that dam and that the matter would be resolved.
"I totally understand the concern of Egyptians as water is a matter of life or death," El-Sisi assured Egyptians.
Posted by Guihon at 3:32 AM