Egypt, Ethiopia and the Nile - Opinion - 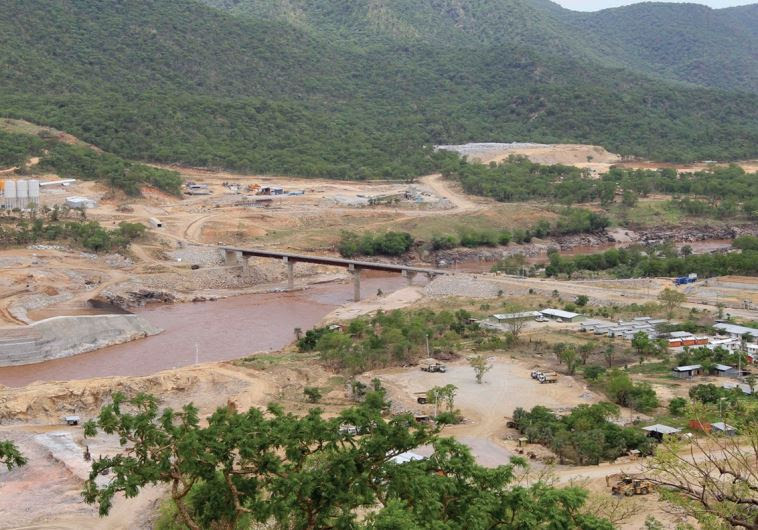 ETHIOPIA’S GREAT Renaissance Dam is constructed in Guba Woreda, some 40 km (25 miles) from Ethiopia’s border with Sudan in 2013.. (photo credit:REUTERS)
When Egypt’s then-president Mohamed Morsi said in June 2013 that “all options” including military intervention were on the table if Ethiopia continued to develop dams on the Nile River, many dismissed it as posturing.

But experts claim Cairo is deadly serious about defending its historic water allotment, and if Ethiopia proceeds with construction of what is set to become Africa’s largest hydroelectric dam, a military strike cannot be discounted.
Egypt fears the new dam, slated to begin operation in 2017, will reduce the downstream flow of the Nile, which 85 million Egyptians rely on for almost all of their water needs. Officials in the Ministry of Irrigation claim Egypt will lose 20 percent to 30% of its share of Nile water and nearly a third of the electricity generated by its Aswan High Dam.

“One reason for the high level of anxiety is that nobody really knows how this dam is going to affect Egypt’s water share,” Richard Tutwiler, a specialist in water resource management at the American University in Cairo (AUC), told the Institute of Policy Studies. He added, “Egypt is totally dependent on the Nile. Without it, there is no Egypt.”

Ethiopia, on the margins of international attention for many decades, has suddenly become a focus of interest. The country, source of 80% of the Nile’s waters, now intends to impose its own vision for the river and a different division of its waters.

Egypt, having been the dominant power in the region for 200 years, is still reeling from recent political upheavals, economic weakness and the drastic diminution of its development – all of which reduce it to the status of one Nile state among many, without the capacity for action.

Egypt is entirely dependent on other states for its water, almost all of which comes from the Nile. Its four principal sources rise several hundred kilometers beyond Egypt’s southern border: the Blue Nile, Sobat and Atbara and its tributaries located in Ethiopia, which provide around 80%, and the White Nile in Uganda, which provides the rest.

Egypt’s share of Nile water has until now been regulated by a 1959 agreement with Sudan, under which Egypt gets 55.5bn cubic meters a year and Sudan 18.5bn. (The annual flow averages 84bn cubic meters, 10bn of which evaporate from Lake Nasser, created by the construction of the Aswan Dam, which came into operation in 1964.) This agreement allotted nothing to Ethiopia and other upstream states.

Under this treaty, a commission representing all the signatories will approve (or reject) large-scale hydraulic projects, dams, canals and anything else that has an impact on the course, volume or quality of the Nile’s waters.

This alliance between six of the nine members of the Nile Basin Initiative – the forum in which Nile states try to find practical solutions and formulate joint projects – has shaken things up in the region. Egypt refused to sign without an undertaking from the signatories not to alter the current division of the water and to recognize the “historical rights” of downstream nations (Sudan and Egypt). It now finds itself without any right of inspection in the Renaissance Dam project – a source of discord – and, for the first time in its history, without a right of veto, which it had thought innate.

Ethiopia’s renaissance as a regional power is under way, strengthened by assets it has hitherto lacked. We are witnessing the emergence of a strong Ethiopia capable of playing a key geopolitical role in its zones of influence: the Nile basin and East Africa.

Egypt has appealed to international bodies to force Ethiopia to halt construction of the dam until its downstream impact can be determined. And while officials here hope for a diplomatic solution to diffuse the crisis, security sources say Egypt’s military leadership is prepared to use force to protect its stake in the river.

Former president Hosni Mubarak floated plans for an air strike on any dam that Ethiopia built on the Nile, and in 2010 established an airbase in southeastern Sudan as a staging point for just such an operation, according to leaked emails from the global intelligence organization Stratfor posted on WikiLeaks.

However, the long-simmering water conflict between Ethiopia and Egypt has moved a step closer to resolution, after the countries’ foreign ministers announced that they had reached a preliminary agreement on sharing Nile waters.

The deal, which still needs to be approved by the heads of state of Egypt, Ethiopia and Sudan, appears to be an important breakthrough, observers say – although details of the agreement have not yet been made public.

“This is significant in my view,” said Mwangi Kimenyi, a Brookings Institute fellow who co-authored a book on the need for a new legal regime on sharing Nile water, speaking to Al Jazeera. “Any development in the sharing of Nile water that is based on negotiations between the stakeholders is a positive development.”

However without some mechanism for significantly increasing the overall supply of water it is unlikely to resolve the core issue of total demand exceeding available supply – and head off the grave consequences that it will inevitably precipitate.
Posted by Guihon at 2:56 AM