On the fringes of the African economic summit in Sharm El-Sheikh, Cairo, Addis Ababa and Khartoum move to cement economic and political coordination between the three Nile nations 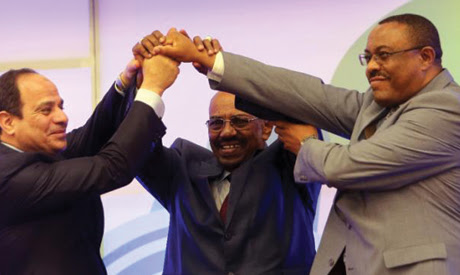 
The meeting was on the margins of the African economic summit in Sharm El-Sheikh.
The council is another step to strengthen ties between Egypt and Ethiopia after Cairo voiced fears over the Addis Ababa's Grand Renaissance Dam project and its possible effect on Egypt's share of water from the Nile.
Addis Ababa has repeatedly affirmed that the 6,000 megawatt dam, which will be Africa's biggest hydro-electric station, would not harm downstream countries Egypt and Sudan.
In April, the three countries selected two international consultancy firms to conduct studies determining the impact of the contested dam on Egypt and Sudan.
In March, Egypt, Sudan and Ethiopia signed a declaration of principles on the dam, agreeing to safeguard the interests of all three countries.
The Sharm El-Sheikh economic summit is hosting Africa’s three regional economic committees (REC): COMESA, EAC and SADC.
Egypt signed Wednesday along with 25 African nations an agreement to form the continent's largest free trade area (FTA), integrating COMESA, SADC, and EAC.
However, Egypt's final ratification of the agreement will be pending approval from a parliament that is yet to be elected, Trade and Industry Minister Mounir Fakhry Abdel-Nour told the state-owned MENA news agency.
Egypt has been without a parliament since the House of Representatives that was elected in late 2011 was dissolved in June 2012 following a court ruling that judged the law regulating its election unconstitutional.
President El-Sisi holds legislative powers until an elected parliament convenes.
The FTA agreement between the three major economic committees, which together account for $1.2 trillion in GDP (more than half of Africa's total GDP), aims to create free trade for goods immediately with the hope of introducing services and intra-continent investor opportunities at a later stage.
Posted by Guihon at 1:09 AM