Egyptian President, Abdel Fattah al-Sisi, is due to visit Ethiopia in the next two weeks. Ethiopian Ambassador to Cairo, Mahmoud Dirdir is quoted as saying  that the anticipated visit “would open great prospects for cooperation between the two countries.” He went on to describe the visit as positive for both countries.
President al-Sisi’s visit would open the way for further exchanges between the two countries, which have been at daggers drawn in the past. At the heart of the dispute has been the Nile. Egypt depends almost exclusively on the waters of the river for its existence. Any disruption of the flow would be catastrophic, yet this is just what the Grand Renaissance Dam , planned by Ethiopia former Prime Minister Meles Zenawi, threatens to do. 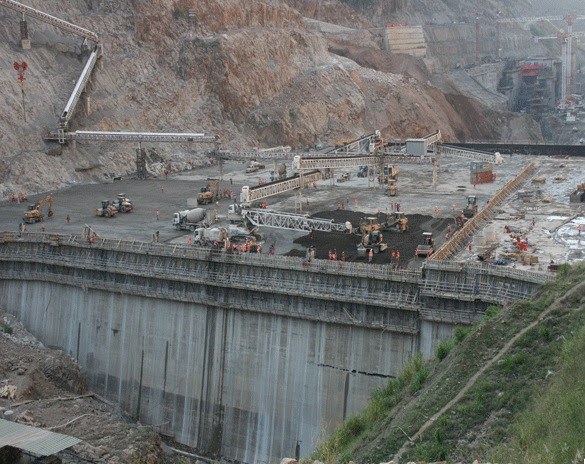 In the past Egypt has threatened to go to war if the Nile waters were reduced in any way. President Anwar Sadat, in 1979 said : “The only matter that could take Egypt to war again is water.” In June 2013 these viewswere reiteratedby a senior Egyptian adviser and echoed by President Morsi, who told a cheering crowd that “all options are open” in dealing with the crisis.
President al-Sisi, having removed President Morsi, won a landslide election and having the Egyptian military behind him, appears to be in a stronger position to deal with the tricky issue of the Nile. Egypt is back in the African Union  and now – if ever – is a time to settle the issue. President al-Sisi has said he want to cement his African ties and dealing with the issue of the Ethiopian dam is critical in this regard.
Maghawri Shahata, an Egyptian expert on water issues, said that Egypt had repeatedly declared its willingness to resolve the matter  through dialogue before, during and after the presidential elections. Ethiopia needed to prove to Egypt that it did not want to harm its interests, and Egypt needed to show Addis Ababa that it supported its development, he said.“Meanwhile, Ethiopia still needs to provide more information about the design and impact of the dam on Egypt,” Haggag said.
There is a long history of tension and bitterness between Cairo and Addis Ababa over the issue. For generations Ethiopian leaders blamed Egyptians for stoking the fires of rebellion in its territory. Ethiopians argued that Eritrea’s independence only came about because of Egyptian support. The question of the Nile and its waters was at the root of the problem. Now, perhaps, there is a chance for Egypt and Ethiopia to establish a new relationship. If President al-Sisi succeeds in doing this, then he could truly claim an historic achievement.
Posted by Guihon at 3:02 AM