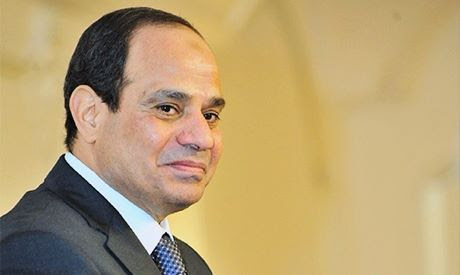 President El-Sisi (Photo: Official El-Sisi presidential campaign)
Egypt's newly elected President Abdel-Fattah El-Sisi said he would not allow a rift to develop between Cairo and Addis Ababa, who have been locked in a stalemate over access to the Nile water.
Ties between Egypt and Ethiopia have soured since Addis Ababa launched the construction of a controversial hydroelectric dam that Egypt fears will substantially harm its share of the Nile River, the country's main source of potable water.
However, El-Sisi unequivocally stated during his inaugural address at the Qubba Palace on Sunday evening that he would not allow friction to take place with Ethiopia.
"I won't allow the Renaissance Dam to cause a crisis or problem with sisterly Ethiopia," he said in the speech addressed to Egyptian public figures after he was sworn in as president of Egypt.
El-Sisi stressed that Egypt is keen on safeguarding Pan-Africanism which, he said, the country cannot disengage from.
Ethiopia's Foreign Minister Tedros Adhanom headed a delegation that attended a morning swearing-in ceremony at the Ittihadiya Presidential Palace. Attendees included Arab royals, African leaders and dignitaries from among Egypt's western allies.
Posted by Guihon at 2:44 AM