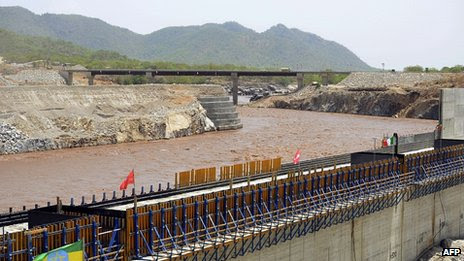 Ethiopia and Egypt have agreed to hold further talks to quell tensions over the building of a new dam on the Blue Nile, their foreign ministers say.
Ethiopia's Tedros Adhanom said the two nations have chosen to swim rather than sink together, AFP news agency reports.
He met his Egyptian counterpart Kamel Amr after Egypt opposed Ethiopia's plans for a hydroelectric dam.
Egypt is worried that the dam will reduce the water supply vital for its 84 million people.
Last week, Egypt's President Mohamed Morsi said he did not want war but he would not allow Egypt's water supply to be endangered by the Great Ethiopian Renaissance Dam.
Continue reading the main story

Mr Morsi said he was keeping "all options open".
Previous statements about the dam had been made "in the heat of the moment", Mr Amr said, at a joint press conference with Mr Tedros in the Ethiopian capital, Addis Ababa, AFP reports.
"We are embarking on a period of mutual cooperation," Mr Amr is quoted by Bloomberg news agency as saying.
"We're looking to the future and I think the future will be very good for both of us."
In a joint statement, Mr Amr and Mr Tedros said that relations between Egypt and Ethiopia remained "brotherly" and talks to assess the impact of the dam would continue.
"We have two options, either to swim or sink together. I think Ethiopia chooses, and so does Egypt, to swim together," Mr Tedros said, AFP reports.
Mr Amr said Sudan would also be involved in the talks. 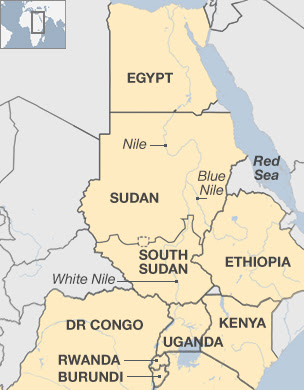 "[We agreed to] ask for further studies to ascertain the effects of the dam, not only the safety of the dam, the environmental effects, but also the effects of the dam on the downstream countries," he added, AFP reports.
Ethiopia's parliament ratified a controversial treaty last week to replace colonial-era agreements that gave Egypt and Sudan the biggest share of the Nile's water.
The treaty had earlier been signed by five other Nile-basin countries - Rwanda, Tanzania, Uganda, Kenya and Burundi.
It is intended to replace the 1929 treaty written by Britain that awarded Egypt veto power over any project involving the Nile by upstream countries.
Ethiopia says the $4.7bn (£3.1bn) dam will eventually provide 6,000 megawatts of power.
Egypt was apparently caught by surprise when Ethiopia started diverting the Blue Nile - a tributary of the Nile - last month.
Addis Ababa says the river will be slightly diverted but will then be able to follow its natural course.
Mr Morsi said Egypt had no objection to projects in Nile basin states "on condition that those projects do not affect or damage Egypt's legal and historical rights".
Earlier this month Egyptian politicians were inadvertently heard on live TV proposing military action over the dam.
Posted by Guihon at 5:50 AM