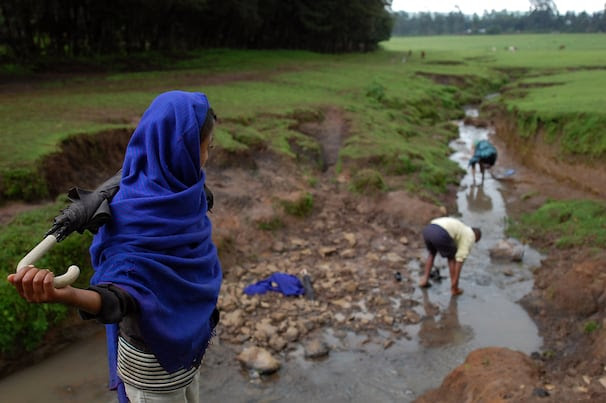 AARON MAASHO/AFP/GETTY IMAGES - Ethiopans walk in the source of the Blue Nile in northern Ethiopia. Ethiopia has begun diverting the Blue Nile as part of a giant dam project 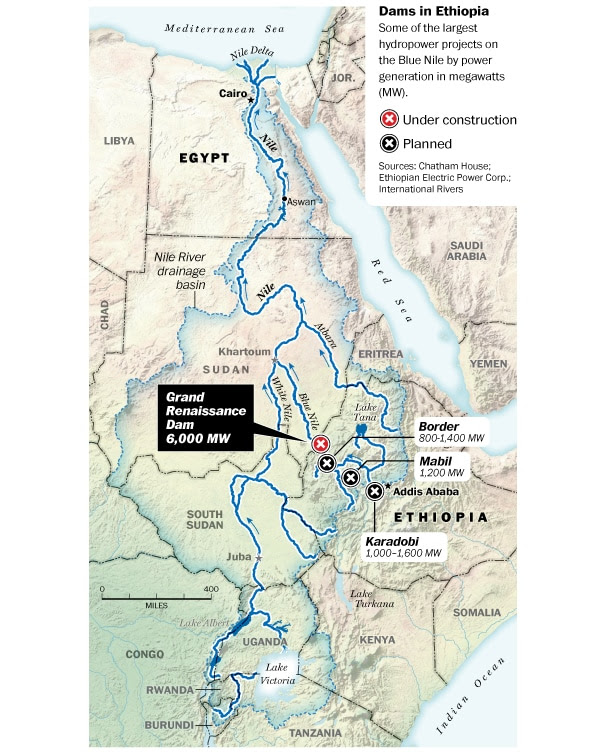 GIZA, EGYPT — Since long before the Pyramids towered above the rich soil of this riverside town, Egyptians have given thanks to the muddy waters of the Nile.
“Plants, animals, humans,” said Ibrahim Abdel Aziz, a 45-year-old farmer, “we all come from this river.”
But trace the Nile about 1,400 miles upstream and there’s a rising colossus that threatens to upset a millennia-old balance. There, in the Ethiopian highlands, one of the world’s largest dams is taking shape.
For Ethiopia, the dam promises abundant energy and an escape from a seemingly permanent spot in the lowest rungs of the world’s human development index. But for Egypt, the consequences could be dire: a nationwide water shortage in as little as two years that causes crop failures, power cuts and instability resonating far beyond even the extraordinary tumult of the recent past.
For a country facing daily domestic crises in the aftermath of its 2011 revolution, the dam is a foreign threat that Egypt can ill afford. And that may be the point. Analysts say Ethiopia is seizing on Egypt’s distraction and relative fragility to plunge ahead with plans that have long been on the drawing board but have always been thwarted by Egyptian resistance.
To Egyptians accustomed to thinking of their country as a powerhouse of the Arab world, the idea of bowing to a historically weaker African rival has been a sobering reminder of their nation’s diminished clout. It has also been an early test for the year-old government of President Mohamed Morsi — one that critics say he has badly mishandled.
“Now the options are very few,” said Talaat Mosallam, a retired major general in Egypt’s army. Diplomacy is the first, but Cairo’s leverage is “at rock bottom,” he said, and if talks fail, Egyptian military commanders may decide that “it is better to die in battle than to die in thirst.”
Indeed, the prospect of a water war has become a regular feature of Egyptian newscasts and front pages in recent weeks, ever since Ethiopia announced that it was diverting the river’s course immediately after a meeting between Ethiopian Prime Minister Hailemariam Desalegn and Morsi in late May.
The announcement, which marked a milestone in the dam’s progress, was seen here as a humiliating slap and an indication that Ethiopia has no intention to negotiate over the dam’s construction.
Morsi responded last week by convening an emergency meeting of leaders from across Egypt’s political spectrum, a move that backfired wildly when the presidency decided to broadcast the session live on television without telling most of the participants.
Thinking that they were conspiring in secret, the politicians hatched plans to arm Ethiopian rebels, launch a whispering campaign about Egypt’s military might and send fighter jets to knock out the dam with one swift shot.
Morsi has not been so explicit, but he warned in a Monday night speech that “all options are open” in protecting the river, which accounts for 95 percent of Egypt’s water needs. The country, he told a crowd of cheering supporters, is ready to sacrifice blood to ensure that “not one drop” of the Nile is lost.
Posted by Guihon at 6:40 AM