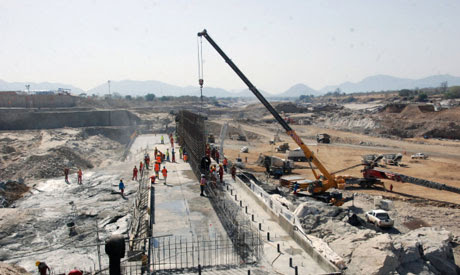 In this photo made Tuesday, April 2, 2013, shows the construction of the dam in Asosa Region Ethiopia. (Photo; Reuters)
The UK government has called on the Nile riparian states to negotiate a water-distribution agreement.“We recognise that the security of the Nile waters is a major strategic necessity for Egypt,” a UK Foreign and Commonwealth (FCO) spokesperson told Ahram Online.
Dr Eassam El-Haddad, Egypt's assistant presidential advisor for external relations and international cooperation, raised the Egypt-Ethiopia Nile water dispute at discussions with British officials in London recently.
El-Haddad was quoted as saying he'd asked UK Foreign Minister William Hague “to help solve the Nile water problem in way which serves all countries' interests.”
He added that the UK could play an important role in the issue as the Nile water-sharing agreements were signed during the era of British occupation.
The FCO spokesperson, however, refused to confirm whether the UK was ready to mediate between Egypt and Ethiopia on the building of the controversial Ethiopian Renaissance Dam on the Blue Nile.
“It is for Egypt and their partners to work on maintaining regional relationships,” he said, adding that the UK would support an outcome acceptable to the countries in the region.
El-Haddad visited London last week to discuss plans for a President Morsi visit to London.
Egypt has been locked with Ethiopia in a dispute over Addis Ababa's construction of a dam to generate electricity on the Blue Nile which feeds Egypt with the lion's share of its water needs.
Posted by Guihon at 11:43 PM